Sir Ridley Scott returns this week with The Martian.  I have already had the chance to see the film version of Andy Weir’s novel which is fantastic, somewhat making up for the last decade and a half of utter clunkers, but for the purposes of this list will not be considered for contention.  Science Fiction has made much of space over the years, but while the likes of Star Wars and Star Trek have giant space battles and weird species, the films on this list go by the mantra that less is more.  These are relatively small films with minimal cast lists, an under-reliance on gunfire and explosions, and ideas at their very heart.  Without further ado, here’s the list.

Having received huge acclaim in its build up, followed by a backlash by some claiming it just to be a lightweight technical exercise, I can only say that Gravity has changed the landscape of cinema.  Although the story is indeed very thin on narrative, that is all it needs.  The premise of two people cut adrift in space has very few ways to turn without becoming ridiculous.  It is also wrong to decry the humanisation of Sandra Bullock’s Dr Ryan Stone, as these are the things that provide the audience with an emotional involvement.  As for the technical wizardry it is plain to see that the film has broken new ground.  The first twenty minutes feels like a NASA film about its explorations of space such is its seeming accuracy in portraying the difficulties and hostile environment that astronauts face.  The film is an edge of your seat thriller that keeps you guessing its conclusion right up to the dying moments of the film.  It is a better film than The Martian as a space thriller, but could possibly do with some of the levity of Ridley Scott’s new film.  Bullock’s performance is sublime and the quieter moments work solely due to her, and for me the film works so well due to these quieter moments.

The only film on this list that has more than a vague grounding in a true story is one of the most popular, enduring films of the 1990s.  Ron Howard creates a great populist cinema piece with this film based on the first real disaster of the space race.  Starring Tom Hanks as Jim Lovell, commander of the Apollo 13 mission, the film carries Hanks’ every-man likeability throughout, as a brilliant cast including Gary Sinise, Bill Paxton, Kevin Bacon and Ed Harris (who would later reprise this role for Gravity) really helps the audience invest in the survival of the three men trapped in space.  There is a very interesting sub-plot going on throughout the film about the public’s already waning interest in the US space program that keeps the film ticking along.  The real reason to love Apollo 13 though is how well it winds up the tension throughout, makes you really feel a sense of danger for the three men, that despite it being a true story the outcome is constantly in doubt.  This is when Ron Howard is at his best, crafting great characters with realistic effects, he can be an underrated filmmaker but his work here is second to none.

Duncan Jones really announced himself as a director with this thoroughly original feeling science fiction film that still has many references to science fiction greats of the past.  Sam Rockwell is Sam Bell, lone operator of a mining site on the moon with only a robot named GERTY for company.  The film descends into a series of labyrinthine twists and turns of corruption and multiple versions of the main character.  In my opinion Sam Rockwell is a hugely underrated actor and his nuanced performance(s) as the multiple iterations of Sam Bell prove how great an actor he is and how much he can do with very little.  Kevin Spacey’s sardonic tones are perfect for GERTY, obviously inspired by HAL 9000 in both looks as well as motivations, and who provides a perfect foil for Rockwell as the plot becomes ever more convoluted and reminiscent of Soylent Green.  Although I have never quite bought the ending, the 87 minutes leading up to it more than make up for it.

Danny Boyle is one of the few mainstream, well recognised directors who finds it easy to hop between genres from film to film.  In between the critical successes of 28 Days Later and later on Slumdog Millionaire and 127 Hours he made Sunshine which is for me his forgotten masterpiece.  Set in a near future in which the Sun is failing, Earth is sending its second mission, the Icarus II, to use nuclear energy to kick start the fading star following the failure and mysterious loss of Icarus I.  Populating the cast with relatively unknown actors, as well as a few better known stars they give a great impression of a group of people forced together with very little in common ground creating a palpable tension.  Although some criticise the film’s final act for descending too far into slasher territory with the introduction of another character, as well as what some describe as heavy handed religious messages.  For me this section bowled me over with both its audacity and execution and as a final confrontation few films of recent years have come close. 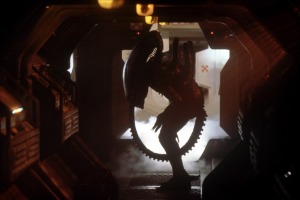 ‘In Space No-One Can Hear You Scream’ is a tagline still in the popular consciousness today a full 35 years after the release of Ridley Scott’s masterpiece, even in the aftermath of the fantastic The Martian.  Such is the popularity and importance of the film that this could sit right at the top of both sci-fi and horror lists.  Although its name has been sullied by an ever worsening series of sequels, prequels and spin-offs it still stands the test of time.  From giving us Sigourney Weaver’s Ripley, still the definitive action heroine even today, throughout the rest of the cast the roles of what are essentially space truckers are played with the right amount of world-weariness that the monotony of space travel would surely induce.  The titular Alien is one of the definitive cinematic creatures, developing from the sexual imagery of its initial face-hugger, which has further clear female empowerment motifs, such as recur throughout the series, and the chest-burster, responsible for one of cinema’s most iconic scenes through to its sleek adult form complete with acidic blood.  Although the film has a rather simple premise it is impossible to outline all the complexities here, but for a terrifying thrill ride through space with one of the great fictional creatures, look no further than Alien, the film that inspired a generation.