Posted on September 28, 2015 by reelsteelcinema 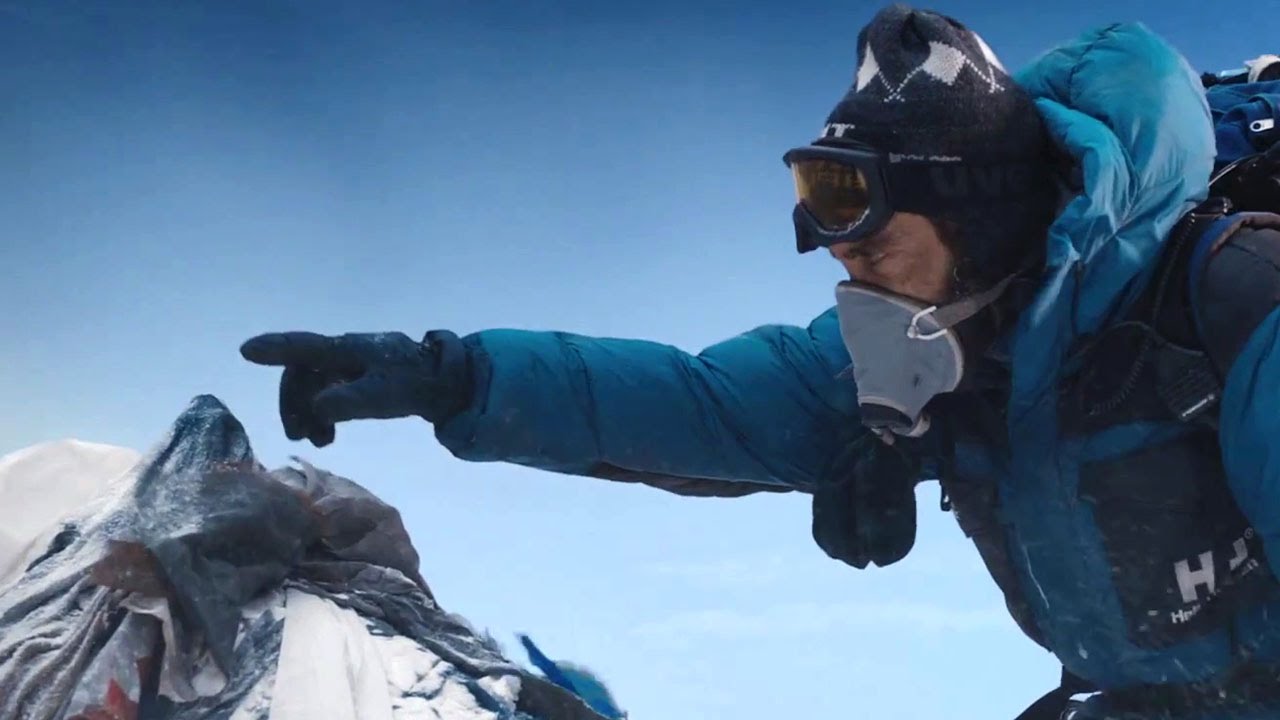 “…The human body was not built to function, at the cruising altitude of a 747”

As soon as one of the characters of Everest utters these words, fairly early into proceedings, the film very cleverly raises the stakes somewhat.  For most people, the dangers in climbing Everest lie in the physical manifestation of the mountain, with its sheer ice sheets, vertiginous drops and plummeting temperatures.  To throw into the mix that the bodies of those involved in a summit attempt are dying just adds further perspective to this already dangerous endeavour.

Simon Beaufoy and William Nicholson have written Everest from the various accounts of the survivors of May 10th 1996 and its aftermath.  This was the day when the dangers of the commercialisation of high-altitude climbing expeditions became all too real, as a crowded mountain, ill equipped climbers and the added pressure of the presence of writer Jon Krakauer led to numerous mistakes and errors in judgement being made, and the single deadliest day on Everest.  Beaufoy and Nicholson have used Krakauer’s Into Thin Air as the basis for this script, bringing other material in when necessary.  Structurally they have constructed a film that most closely resembles a 1970s Disaster Movie, only one that is depicting true events.  With a wide cast of familiar faces and numerous storylines going on at once, this was a risky move, yet it was one that ultimately offers an exceptional pay off.

The cleverest move the script makes is to have a very good go at being as true to life as is possible in what is ostensibly a movie made to entertain rather than document.  I have seen the film twice now, once in IMAX and once in regular 2D format, but more on that later.  In between these viewings I devoured Into Thin Air in one evening, with the view of using my second viewing to search for mistakes, inaccuracies and melodramatic constructions within the film.  It struck me whilst reading the book that, controversies around some of its depictions of the characters aside, the film offered pretty much the same interpretation of events, albeit in a more balanced way.  There is one moment in the film that concerns the levels of oxygen in some previously stashed bottles that is left open by the film, while the book, from its viewpoint of hindsight, offers a greater explanation and closure of this incident.  Otherwise the film is very nifty at how it deals with moments that are unknowable, thanks to a lack of surviving witnesses.

The film has amassed a cast of names that specialist film lovers will drool at, yet cleverly chooses not to really cast a ‘marquee name’ but rather a group of actors that would make up a ‘that guy’ list.  The female stars may be somewhat underserved, Robin Wright especially has very little to do in her meagre screen time while Keira Knightley is capable of a much greater range of emotions than her fairly one note character has to display.  Conversely Emily Watson manages to steal the film away from her more prominently billed co-stars as the base camp manager, who has to hear all the disasters that are happening on the mountain while being helpless to offer assistance.  It is a difficult role that she pours her heart and soul into, and the role that most corresponds with an emotional output for the audience to tap into.  The problem with the male characters, Sam Worthington aside, is that in the dramatic final act they all become one and the same.  Josh Brolin’s domineering performance as Beck Weathers had already somewhat overshadowed the work of Kelly and Hawkes in the build up to the climb, and although Jason Clarke continues his campaign to be the most dependable, yet underrated actor working today with a stoic performance as Rob Hall.  He is essentially the lead of the film, features most prominently throughout and acts as a steady anchor point for the other performers to work from.  More surprisingly Jake Gyllenhaal, the closest thing the film has to a real star on the mountain, feels somewhat lost in translation, as though his character was a secondary thought that occasionally leapt across the collective synapses of the screenwriters.  Although all these performances are all well and good, they do not quite generate the emotional pay-off in the third act that the build-up suggested, simply because the film cannot find a way around the fact that, in disaster, these are all simply men with snowy beards dressed in varying colour North Face climbing gear and sunglasses.  In short they all meld into one in the final act.

Of course no discussion of Everest would be complete without considering the majestic technical achievements Balthasar Kormakur and his cinematographer Salvatore Totino have made in bringing this film to screens.  The build up to the final act is used not only to introduce the characters and develop them, but also to introduce the concept that Everest looms large over all.  Every outdoor shot features the vastness of the mountain, and subsequently the impending challenge.  This vastness is accentuated by a series of sweeping shots that are beautiful to look at while at the same time once again emphasising to the audience the enormity of the film’s scale.  That being said for me the greatest technical achievement of the film is making the audience feel that these Hollywood A-Listers are all suffering for their craft.  There is a chill factor over the entire film, the air looks cold, the actors look cold, and even the special effects that are effortlessly melded in to create the storm seem cold.  As far as the 2D versus 3D debate goes, while I did enjoy the scale offered by the IMAX, I do wish that it had been a 2D projection.  The 3D blurred all too easily were I to just catch the film at the wrong angle, while the additional brightness offered by the 2D helped make clearer the darker, stormbound shots.

I was accompanied by a friend to my second viewing and, though she enjoyed the film, expressed her surprise at how bleak the film’s outcome was.  Despite some triumphant moments towards the end of the film, it is a very downbeat film.  I was totally mesmerised by the drama and the cinematic experience of the film.  It took me from disinterested to devouring an entire book about the subject in an evening with just one viewing, for me a measure of a special film.  It is not without its flaws, although I would counter that these flaws are inherent to the story.  Either way expect to see an exhilarating, emotionally draining film that will leave you awestruck, and remain with you long after the credits roll.