The release of Life this week sees Anton Corbijn, whose best film is still his Joy Division/Ian Curtis biopic Control, take a look at James Dean, and his relationship with Life Magazine photographer Dennis Stock.  This got me thinking, Hollywood often takes a look at itself, and in fact the last few Oscars have seen The Artist, Argo and Birdman win Best Picture Awards.  Sometimes these films can be positive about Tinseltown, sometimes the more subversive filmmaker creates a thoroughly depressing, scabrous film about Hollywood.  From grand epics, loving homages, odd, surreal masterpieces and downright brutal trashings, I take a look at the five best films made about Hollywood, by Hollywood, for Hollywood. 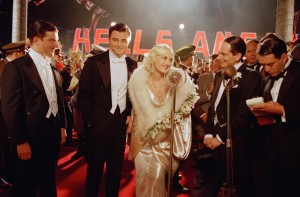 Having made a career defined by his epic biopics, usually starring Robert De Niro, the latter day partnership between Martin Scorsese and Leonardo Di Caprio took on the subject of Howard Hughes in this near three hour film.  To me this has always been Scorsese-light, which if nothing else proves just how high the standard of Scorsese’s filmmaking is.  This film beat a proposed Christopher Nolan project into production and, along with Steven Spielberg’s Catch Me If You Can, is the first example of Di Caprio’s evolution from baby-faced heart throb to genuine serious actor with screen presence.  Hughes is a hard character to play, such is the scale of the period covered and the many facets of his character displayed throughout the film and, despite the confident younger Hughes coming very easily to him, it is his work as the older, more troubled Hughes that impresses more.  Like all Scorsese films the design and achievement in capturing the environment it plays out in is phenomenal, yet sometimes the film feels a little structured, with the endless sequence of walk-on cameos a touch distracting, although the performances from Alan Alda, Cate Blanchett and John C. Reilly are brilliant.

Next year sees the return of The Coen Brothers with their Hollywood set Hail Caesar, but until then, why not bask in the underrated brilliance of their 1991 noir, Barton Fink.  John Turturro gives one of his very best performances as the eponymous character, a feted New York screenwriter with lofty aspersions of representing ‘the common man’, whisked off to Hollywood to do a generic wrestling film.  This film is very good at showing what goes on behind the scenes of Hollywood, this is not a film about actors and directors and films actually being made, but this shows a world populated by screenwriters, producers and studio executives, all battling to get their visions to the screen.  Much of the film goes away from this, instead showing the slow descent into madness of a man isolated from what he presumes his vision to be, while faced with larger than life characters (played as always by John Goodman).  Barton Fink is as close to horror as the Coens have ever gotten, and they prove to be exceptional at it.  The whole film is eerie, with the seedy motel and unexplained happenings  only heightening the tension, but it is the clever writing that makes a film about writing so interesting, if very unexpected. 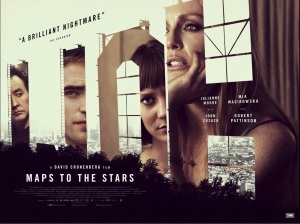 When Canadian horror maestro David Cronenberg turned his eye to Hollywood, something he has always been distanced from, the results were unlikely to be pretty, in fact, this is possibly the ugliest portrayal of the town on screen ever, and also one of the most brilliant.  Julianne Moore turns it up to eleven as Havana Segard, a B-List actress who displays all the trappings of self-entitledness and more, desperate to play the same part as her  mother once did in an upcoming remake.  Her path crosses with the family of her therapist (Cusack), whose teenage son has been turned into an addicted monster by child stardom, while the obligatory P.A. and limo driver hold jaded yearnings for stardom.  There is not one character in Maps To The Stars that has not been utterly twisted beyond all humanity by Hollywood, and the daringness of Bruce Wagner’s warts and all screenplay in showing this is truly breath-taking.  Cronenberg coaxes utterly brilliant performances out of his entire cast, but particularly Moore, who is genuinely unnerving as the woman teetering on the edge of sanity because of her misplaced desires.  This is the one film on this list that I am really surprised got made, given that there is no redemption for its setting at all.  Had anyone else tried to do this kind of material it may have felt a little forced, but Cronenberg’s history adds a certain relevance to proceedings that is integral to the film’s success.

Ed Wood was a film director from the 1950s who made cheap monster B-Movies widely known as ‘the worst movies of all time’.  That he made for an interesting subject for Tim Burton, who at the time was one of the few mainstream directors whose love of these films was well known, was fairly obvious.  Shot in the same monochrome style as Wood’s movies were, it is clear that Burton had no interest in mocking Wood’s inabilities, but rather paying a loving homage to someone like him, who made films for the joy of making films rather than any other motive.  It helps that Ed Wood is an interesting subject in himself, a man who will stop at nothing to get his films made, be it casting ill-suited chiropractors as body doubles, having his whole troupe baptised to get funding, or using a psychic for movie making advice.  Although the film plays his two relationships nicely, bringing out the struggles he had as a cross-dresser, it is his friendship with an ageing Bela Lugosi that is the backbone of this film.  Martin Landau is very worthy of his Best Supporting Actor Oscar for his portrayal of Lugosi, while as the ever optimistic Wood, Johnny Depp has never been better.  Neither for that matter has Tim Burton, whose recent downward spiral could be halted by forgetting the gothic mannerisms he has inbuilt into his output and remembering back to a time when he made films for the sheer enjoyment of it. 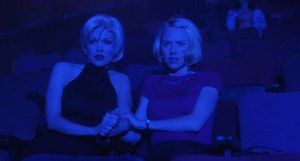 A failed attempt to create another Twin Peaks ended up producing David Lynch’s most debated film, and one of its best.  This has more of the feel of Maps To The Stars, given its subject matter about the chewing up and spitting out of young starlet’s dreams, yet this being Lynch there is so much more.  I have seen this film over twenty times and yet I am still not 100% on what happens in it, suffice to say that jumbled time frames and extended dream sequences play a major part.  This is the film that introduced the world to Naomi Watts, here playing Betty, fresh off the bus to be a star in Tinseltown, before joining amnesiac ‘Rita’ to find her identity.  What sets out as a Nancy Drew like storyline becomes more and more disturbing and surreal as their investigations lead them to ‘Club Silencio’, while at the same time Justin Theroux’s director Adam Keshner battles mafia influence on his latest film.  I do enjoy Lynch’s love affair with the 1950s, and the studio lot sequences just scream this period, all Formica and doo-wop music, which is utterly wonderful.  Even though the film offers one of the more convoluted resolutions of modern cinema the viewing experience is as ever a rewarding one, with gorgeous cinematography and Angelo Badalamenti’s finest hour as a composer, with his haunting score a perfect accompaniment to the nourish atmosphere.  Over the years since this film first beguiled me I have read many articles claiming to definitively offer an interpretation to the film, but my advice would be to sit back, relax and let this utterly unique film wash over you.