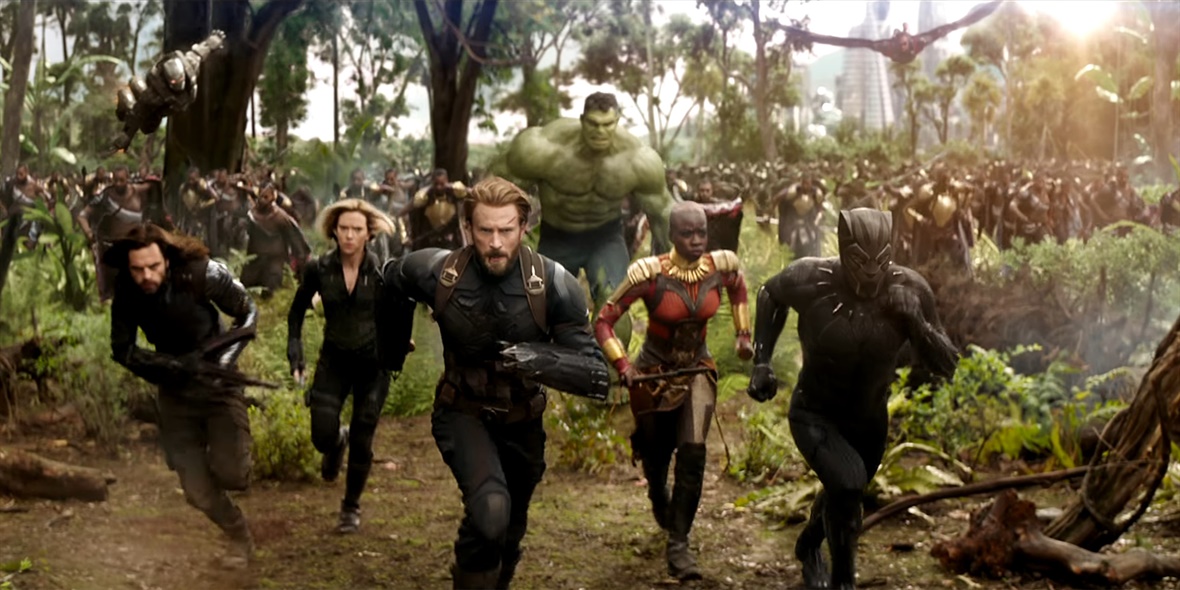 So here we are.
Ten years since Nick Fury appeared in Tony Stark’s penthouse and mentioned ‘The Avengers Initiative’; six years since The Avengers changed the way audiences consume not only superhero movies, but Hollywood blockbuster movies in general.
Marvel has somehow perfected a sleek, surefire formula for its films by now. Even the relative lower-tier disappointments are successful enough that their cinematic universe appears more or less bulletproof, both critically and commercially (Iron Man 2 and Thor: The Dark World are commonly held up as being ‘the less good’ Marvel movies, but it’s still difficult to argue with any real passion that they’re actually ‘bad’, such is the astronomically high bar Marvel have set themselves over the past decade).

Avengers: Infinity War is in many ways a culmination of everything that has come before, although of course we still have another movie to go before ‘phase four’ kicks in properly. It is supremely confident filmmaking, relentlessly paced and trusting that, by now, everyone in the audience is familiar with these characters and their starting positions going in. No time is wasted on bringing the uninitiated up to speed, because at this point, why would it be? Marvel/Disney’s utter control over comic book moviedom at this moment in time means that you’re either fully invested in the various multi-film ins and outs of the MCU, or you dropped out early on and wouldn’t be watching this anyway.

The result is a breathless, frequently thrilling – although, it has to be said, at times exhausting – love letter to these characters and the fans who have connected so completely with them and their exploits. The real joy of these films has always been the interplay between their various characters, and Infinity War is no different.
Since nearly every major player from all the Marvel movies until now shows up here, there’s a wealth of tensions and friendships to dig into, and some of the resulting team-ups and personality clashes make for both good drama and some typically strong humour (the pairing of the Guardians of the Galaxy with Thor makes for the film’s funniest scenes, and Tony Stark and Doctor Strange’s bitchy animosity towards each other makes perfect sense).

It all plays into the classic comic book mentality of “what would happen if x met/fought y” to great success, although the sheer number of characters in play here does mean that some of them get relatively short shrift when it comes to screentime.
Captain America feels relegated almost to a cameo, weirdly, although I imagine he’s being set up for some much bigger moments in the next film. There’s an extended subplot regarding the romance between Wanda and Vision which honestly feels stretched to the limit of necessity, and probably could have been sheared down by a couple of scenes. But of course, the satisfaction of who’s getting the most screentime will inevitably come down to individual favourite characters (full disclaimer, I’ve been reading comics – particularly superhero comics – for the past twenty years, so I’m coming to this with no small amount of ‘fan baggage’ in this regard).

Perhaps the film’s biggest and most successful surprise is its villain. Marvel seem to have learned a lesson or two from their earlier films, which were often victim to some fairly flat, cardboard baddies. Loki has always been fun and interesting, but for a long time he was pretty much the only villain in the Marvel movie stable who was as layered and watchable as the heroes. However, the one-two punch of Kilmonger in Black Panther and now Thanos in Infinity War may be a sign that the bad guys are finally getting their due.

Brolin is fantastic in the role as the mad titan, who wishes to use the Infinity Stones to wipe out half of all life in the universe in a sociopathic act of ‘balance’. The role could have easily been one of simplistic corniness – the mad despot who wishes to DESTROY because he’s EEEEEEEVIL – but Brolin plays him with the subdued melancholy of someone who genuinely believes he has to do something atrocious in order to contribute to the greater good. He is the villain who sees himself as a hero, and in a way, the film gives him a classic hero’s journey. He has all the agency; he pushes the plot forward, and all Earth’s Mightiest Heroes can do is react. We spend a lot more time with Thanos than expected, and by the time of the film’s audacious Empire Strikes Back ending (no spoilers, but suffice to say it’s the kind of ending no major studio would ever pull off unless they were utterly certain everyone would be coming back for the next one regardless), he emerges as its most fascinating element.

Ultimately, Infinity War stands as one of the high points of Marvel’s cinematic universe, although some of the CGI pummelling does become a little wearying (a large-scale battle in Wakanda near the film’s end actually detracts from some much more interesting emotional stuff going on elsewhere, to the point where it feels like it’s almost getting in the film’s way), and overall it’s maybe a touch too long. There are also a couple of scenes slightly undercut by the unfortunate Marvel trend of immediately following a potentially affecting moment with a pithy line and wink at the audience.

However, these are minor nagging points in an otherwise genuinely impressive achievement. That Infinity War is simply coherent is enough of a triumph, but it is also a consistently engaging epic, full of spectacle and wonderful characters played with absolute assured brilliance by all involved. The Marvel movies almost have to be graded on their own metric at this point, so unprecedented is the company’s success streak so far. It will be fascinating to see what will happen when (if?) they inevitably make an outright bad film, because if Infinity War proves anything, it’s that Marvel aren’t done being the outright masters of the comic book movie in our time.