Posted on January 16, 2019 by reelsteelcinema 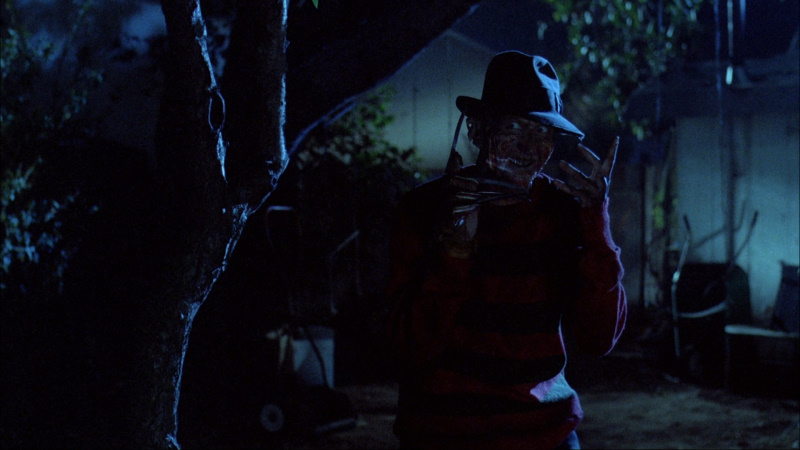 From its earliest antecedents in folklore and fairy tales, the fuel for scary stories has always been bad dreams. The demons that haunt Man’s dreams have become some of the horror genre’s most enduring characters; think vampires, werewolves, ghosts, and Freddy Krueger.

Since its conception, horror cinema has drawn upon the nightmare – its otherworldliness, sense of no escape, all encompassing darkness, and terrifying bogeymen – to scare, surprise, and throw audiences off balance.
Take, for instance, the 1920 silent classic The Cabinet of Dr Caligari. With its dreamlike, skewed German Expressionist sets, and ending where everything is revealed to have actually been a dream, it set a precedent for the genre to follow.

In fact, so ingrained had it become that by the time A Nightmare on Elm Street was released in 1984, the nightmare – invariably in the form of a false scare culminating in a character waking screaming bolt upright – was now cliché. What Elm Street did so well was centre the film on the nightmare.
Unlike Caligari where we are led to believe this fantasy world is the characters’ reality until the rug is pulled, Elm Street weaves dreams and reality in such a way it becomes difficult to distinguish where one ends and the other begins.

Expertly directed by genre master Wes Craven, A Nightmare on Elm Street certainly lives up to its name. Craven taps the nightmare for all it’s worth, playing on our primal fear of dreams. We’re at our most vulnerable when we’re asleep, both physically and mentally. It’s also where we’re most alone as we’re left to fight the demons of our mind single-handedly. But what if those demons aren’t just in our mind? This is the question Craven poses and answers in terrifying fashion as he introduces us to one of horror cinema’s scariest, most iconic villains.

Burnt faced with a dirty old fedora, green and red-striped sweater, and a razor-fingered glove, Freddy Krueger cuts a striking figure. He’s also got attitude and a depraved sense of humour to boot. Played with gleeful abandon by horror legend Robert Englund, Freddy ushered in a new breed of horror villain. No longer faceless or silent like Michael or Jason, he paved the way for villains with personalities and penchants for one-liners like Chucky from Child’s Play.

Taking its cue from slasher granddaddy Halloween, Elm Street centres on a group of suburban teens picked off one by one by a seemingly indestructible bogeyman. However, unlike Michael Myers, Freddy has a disturbing motive. A child killer burnt to death by vengeful parents, he returns from the grave to exact his revenge by killing his murderers’ remaining kids.

Whereas most slasher teens are nothing but good looking cannon fodder, the kids in Elm Street are likeable, well-developed characters left to fend for themselves in a world of ineffectual adults. Despite boasting a very young Johnny Depp, dispatched in gloriously gruesome fashion via a fountain of blood erupting from a bed, the real star of the show is Heather Langenkamp’s Nancy.

Perhaps the ultimate final girl, Nancy is one of ‘80s cinema’s strongest, most resourceful heroines. Determined not to be another of Freddy’s victims, she takes him on single-handedly in a final act that plays out like a horror precursor to Home Alone. She outwits him, bringing him out of the dream world and luring him into home-made booby traps, before finally turning her back on him and renouncing the fear that gave him his power.

With a great cast, inventive concept and effects, memorable heroine and iconic villain, Elm Street proved a big box-office draw.
Unsurprisingly it didn’t take long for a sequel to materialise. 1985’s A Nightmare on Elm Street 2: Freddy’s Revenge turned out to be an enjoyable if unspectacular entry that disappointingly dropped the entire original cast, save Englund’s Freddy.

This was all to be rectified in 1987 with the release of A Nightmare on Elm Street 3: Dream Warriors.
While it doesn’t completely retcon the sequel – the events of Elm Street 2 could still have happened – it’s comparable to 2018’s Halloween in that it’s a direct sequel to the first movie, which sees the return of the original heroine, and director (this time as writer/producer).

Unlike its predecessors, Dream Warriors is an unashamedly commercial entertainment machine and it’s all the better for it. Upping the action and humour whilst downplaying the series’ darker aspects, Dream Warriors shoots for mass appeal acceptance and succeeds spectacularly. The most notable shift towards this more commercial approach is the addition of more overt fantasy elements.

A staple of ‘80s cinema, fantasy films like The Neverending Story proved big box-office draws. Dream Warriors appropriates the fantasy movie format with a classical tale of a band of misfits – in this case troubled teens with unique dream powers led by Nancy – who embark upon a quest to defeat evil.

The lean towards a more fantastical approach is also a great showcase for the movie’s groundbreaking effects. Encompassing practical makeup, animatronics, visual, and stop-motion effects, Dream Warriors treats us to a cavalcade of imaginative images. There’s a huge Freddy snake, a chest of souls and, in a tribute to fantasy effects master Ray Harryhausen, a stop-motion skeleton. The dreamscapes are more over-the-top this time too, with imagery like a flaming pit lined with skulls straight out of a heavy metal album cover.

This is also the movie where Freddy comes into his own as a wisecracking comical villain and pop-cultural icon. His kills are a lot more creative this time around, personalised to prey upon each character’s specific weakness and punctuated by a scathing yet hilarious one-liner. The most memorable example being the “cut to primetime, bitch!” line before he smashes a TV-obsessed teen head-first into the TV set.

Topped off with a fist-pumping theme song courtesy of hair metal titans Dokken, it’s easy to see why Dream Warriors is such a fan favourite and is generally considered the best of the Elm Street sequels.