Posted on November 15, 2018 by reelsteelcinema 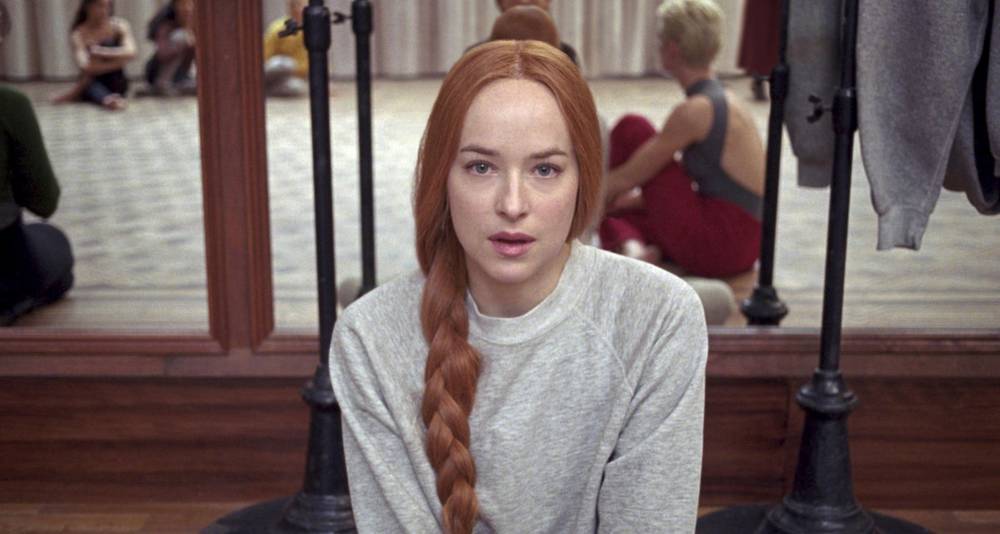 Luca Guadagnino’s bold reimagining of the 1977 cult classic is equal parts gorgeous and grotesque. Suspiria (2018) takes the bare bones of Argento’s original film and adds new layers of flesh. The result is a luridly visceral and provocative Danse Macabre about memory, guilt and rebirth that simultaneously speaks to and departs from its iconic source text.

Set in West Berlin during the Cold War (specifically, the same year that Argento’s film was released), Suspiria is preoccupied with both the physical body and the body politic. When American dancer Susie Bannion (Dakota Johnson) arrives in Germany to audition for a place at the prestigious Markos Dance Academy, she is taken aback by how bleak and violent the surrounding urban landscape is. Nestled in the shadow of the Berlin Wall, the academy serves as a microcosm of a divided nation; the power struggles within the matriarchal institution mirror (an apt word choice) those without. It quickly transpires that the academy is home to a coven of witches who intend to lure the talented Susie into their ranks.
As the plot unfolds, three dancers fall victim to the dark forces at work in the bowels of the academy. In one particularly unnerving sequence, Olga, a Russian dancer who publically accuses Madame Blanc (Tilda Swinton) of witchcraft, finds herself trapped in a hall of mirrors as she attempts to leave the academy. While Susie performs a frenzied dance routine in another room, Olga’s body is brutally broken and contorted by an unseen, supernatural force.

Despite its frequent displays of body horror, Suspiria is an unapologetically highbrow film. Grindhouse gore is tempered with art-house sensibility and this aesthetic confrontation will undoubtedly leave some critics confused as to whether they should applaud its ambition or sneer at its ‘pretentiousness’.
Like Madame Blanc’s revival of Volk – the post-war interpretive dance she created – Suspiria is “A piece about rebirths – the inevitable pull that they exert, and our efforts to escape them”. This excerpt of Blanc’s dialogue tells us everything we need to know about Guadagnino’s vision and the relationship between his Suspiria and its precursor.
Although Argento’s dizzying colour palette is muted, the arresting visuals remain intact and Thom Yorke’s haunting score is truly the pièce de résistance that intensifies the disorientation created by the camera’s balletic movements.

Suspiria certainly succeeds in casting a kind of spell on its audience in that it demands to be seen again. Guadagnino’s film captures the sense of something unfamiliar at the heart of the familiar – that which Freud called Das Unheimliche – and it is precisely this mastery of the uncanny that makes Suspiria such an interesting piece of cinema. The most obvious manifestation of this (un)familiarity is the spectacle of Tilda Swinton in heavy prosthetics playing both Dr Klemperer, a male psychoanalyst, and Helena Markos, the coven’s decrepit leader. The casting of Swinton in three roles not only creates a sense of the uncanny, it suggests that the film has something more to say about women and power that it (and, indeed, this review) has time to unpack.

See our retrospective feature on the original 1977 Suspiria film >here<.