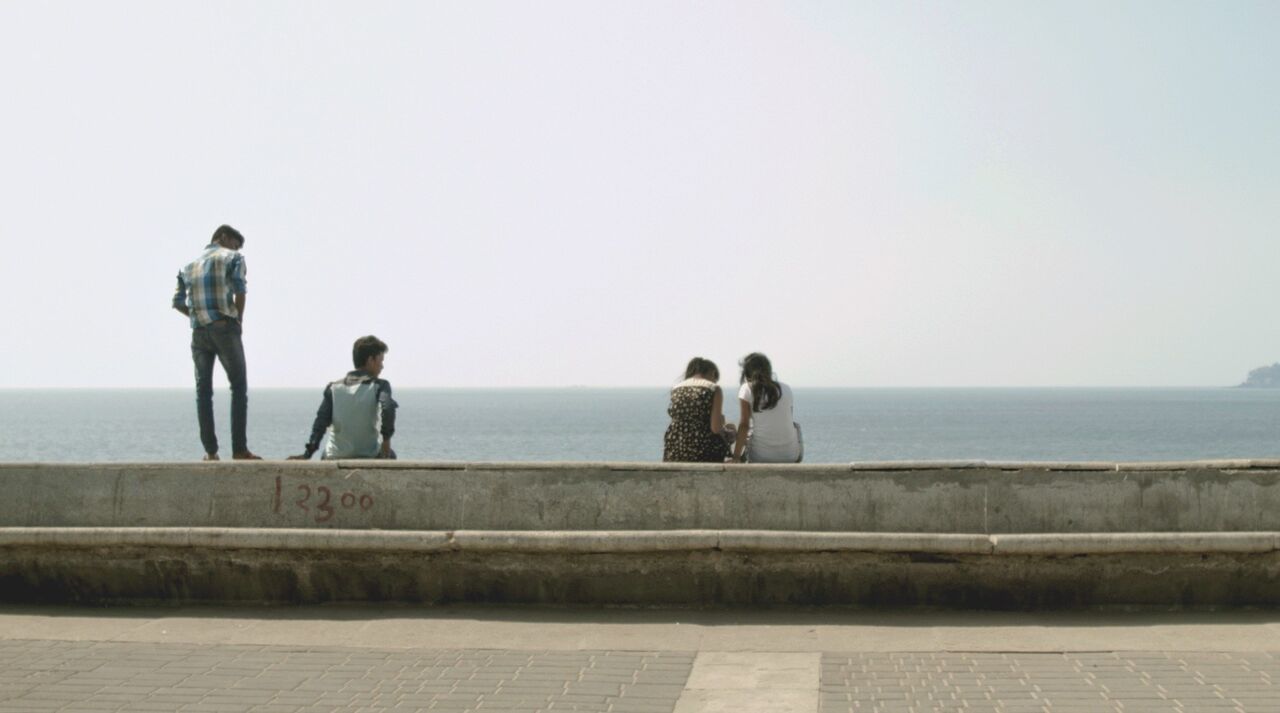 Boys Who Like Girls follows the work of Men Against Violence and Abuse (MAVA), a group in India addressing gender issues, and the story of one boy, Ved, as he deals with family, school and the challenging culture of gender inequality.

See our full review of the film >here<.

We spoke to Inka Achte, director of Boys Who Like Girls and Liisa Karpo, the film’s producer at Sheffield Doc/Fest 2018.

Reel Steel: I think I’ll start by asking how you came about Ved and the group and what inspired you to make a documentary about them?

Inka Achte: when the 2012 gang rape in New Delhi happened, I was reading a lot about the reporting and trying to understand what would make a person do such an act. And then I was reading the news and I discovered that there was this men’s movement in India where men were standing up for women’s human rights and trying to basically prevent those kind of mindsets from developing. And through that research and that reading, I discovered Harish who runs MAVA and I contacted him and said that I found it really interesting and inspiring and kind of, I dunno, like healing as a woman, and encouraging that men were doing these things.
Then I happened to be in India at a film festival and I flew to Mumbai to meet him and he introduced me to Ved, or to this project that they were doing for teenage boys and Ved just kind of stood out because he was … he seemed quite troubled and I found out that he had a violent dad and that was kind of interesting in terms of the story.

RS: Why do you think they wanted to be a part of it and get involved with the film?

IA: Well obviously for Harish it’s publicity, it’s making people in Europe aware of their work because I don’t think that …you know, he’s not really known here. So for that reason I think.

RS: There’s that bit in the film when he goes to the women’s convention and there’s almost surprise that there’s a man leading a group for young boys. Was that the kind of sense that you got?

IA: Well I think everybody’s always like “oh that’s fantastic, that’s really important” and people are really happy that he’s doing that, but somehow it just doesn’t help him get any funding. I mean, he gets some funding but it does seem that a lot of funds and a lot of money gets targeted for women led organisations like that woman says in Copenhagen. So he’s … the fact that he’s doing something unique is obviously good but it also makes it really hard for him because he’s competing with women’s organisations and a lot of those kind of funds that are for women’s equality or women’s empowerment, they go to women. Which is good, but it would be great if somebody acknowledged that it’s actually vital for some kind of preventative measures that work with boys to prevent … it seems crazy.
Because of course we have to work with boys. We need to make them aware that these kind of thought patterns aren’t healthy. It’s strange that he’s struggling so much financially.

RS: I think that was the overriding message wasn’t it? That we do have to include men and young boys, even just in the discussions about gender equality because the workshops they put on aren’t just about not fighting each other, they’re about how we speak to each other.

RS: In terms of funding, how did you secure backing for the film?

Liisa Karpo: Actually the film is funded by Nordic funds, film institutes and TV stations. We have a Norwegian co-producer and it was challenging during the fundraising to convince the financiers that this issue is important and relevant to us in the Western countries as well.
And throughout the production it became more and more relevant: #metoo happened, Trump was elected, all this stuff. And we obviously don’t have to justify this anymore over here, but a few years ago, like three years ago when we were beginning and starting to look for funding, it was really like we had to explain and convince that this was important for us as well. So it was a challenge.

RS: Has it been a challenge get it distributed as well or have you found that people have been quite enthusiastic?

LK: Yeah, I think they’ve been happy and enthusiastic and we have been getting really nice offers and we’re just about to close a deal with a sales agent. This is our first festival so we will see after this how enthusiastic people will be! But it’s looking very promising.

RS: I think the film is interesting because of the way Ved develops and the way his story develops.
Was it intentional to follow Ved in such a personal way?

LK: I think that was intentional from the very beginning, that you wanted to follow a young boy around this topic.

IA: Yeah, exactly. I guess with what’s happening in India and everywhere and that’s there’s a societal change going on and a shift when it comes to the way women are treated, and I guess I knew that by including a teenager, his story could embody that change in a way.

RS: When you were making the film did you find that it affected you in any way?
Because there are quite a lot of sensitive issues that come up.

IA: Yes, it did affect me. First of all, it made me realise, in a very kind of hard hitting way, how insanely privileged I am.
For example, Ved’s mum is probably only a few years older than me and has a completely different kind of life. You feel strange that you realize how insanely privileged you are but at the same time how little you can actually do to change anything. That was maybe the main thing. But also it was incredibly good for me to get to know men who work like that and who care about these issues. I somehow think I’m a lot less cynical as a human being since making that film. I think that was really important for me.

LK: I think there were moments when we were kind of depressed about the fact of how slowly things progressed, how small the progress is and how slow the advance is in India. But then again, now seeing the film and having all of this global discussion around the issue, I feel more hopeful all the time.
The main thing is that change is happening but it is slow, and might even be too slow to witness in the film at all so it was something that we were discussing a lot as well.

IA: But when it became apparent that the change is slow, I think we kind of just accepted that there isn’t gonna be this massive feminist awakening, there will be very small things that we can see in Ved and that’s alright. For me, small change is better than no change.

LK: And that starts from the individual.

RS: You were obviously very much involved, but just to cope with how personal and sensitive things were did you have to maintain some kind of distance and impartiality as a filmmaker?

IA: I don’t know, I think that I get very personally invested, I don’t think I’m very good at keeping my distance! Like I really take things to heart a lot, but of course the physical distance that I live in Finland helps a lot so it might be different if I lived in Mumbai.
I do and I did really deeply care about them, I found the mum’s situation, for example, extremely distressing. But I live in Finland so it’s kind of easy in that sense to get on with life.

LK: But obviously we are still keeping up with them all the time and we are supporting Ved in his studies.

IA: Yeah, that would feel impossible to just be like “ok, thanks!” and then go galavanting around the world showing the film.

LK: We really developed a personal relationship with the people and we really want Ved to do well in life.

IA: Yeah so I think it’s kind of our responsibility now to support tem. You can’t just make a film and then abandon them in that sort of way.

RS: How is Ved doing?

LK: I think he’s still in the theatre group as well,

IA: Yeah, he’s still in the theatre group and Harish continues to support him as well. Yeah, I think he’s doing really well. Rajesh his good friend is getting married!

IA: Yeah, they found him a wife. But Ved says he doesn’t want to get married.

RS: Has anyone involved in the film seen it yet?

IA: Yeah, we went to Mumbai to screen the film and all the boys from the community came and there was a crazy party. Yeah, they’ve all seen it.

RS: What did they think of it?

IA: They love it! Which I’m so, so happy about.

RS: What’s next then, now that it’s over? What else have you got planned?

IA: You mean film-wise? Oh my goodness, right after doing the film in India I thought “ok, I’m not doing anything like this anymore” –

LK: – She was actually like “Liisa, next time it will be an easier place that is much more convenient!”

IA: Yeah like “I’ll do something interview-based in Finland”, you know, archive and interview, “I’m not going to any weird climates anymore”. But now this project that landed on our lap –

LK: We just came back three weeks ago from Somaliland!

LK: I was reminding her like “what was that about an easier location? I remember some kind of talk about that…”

IA: So yeah, we’re doing a film about Finnish Somali family, about a guy who came to Finland during the Somali civil war 25 years ago and now he’s moving his entire family back to Somaliland, so kind of a reverse immigration story.
And then hopefully just sending this one out to festivals, and I really hope it gets seen as widely as possible. I think for MAVA, this kind of publicity is vital because he [Harish] is not like a PR expert.

LK: He has his hands full with managing the organisation in Mumbai so any help that we can give to them for creating awareness or getting people to donate money is absolutely our priority.

To donate to Men Against Violence and Abuse, visit their fundraising page:

You can see Boys Who Like Girls at Sheffield Doc/Fest, info and tickets available here: