Cult Corner: The Ship of Monsters

Posted on March 7, 2018 by reelsteelcinema 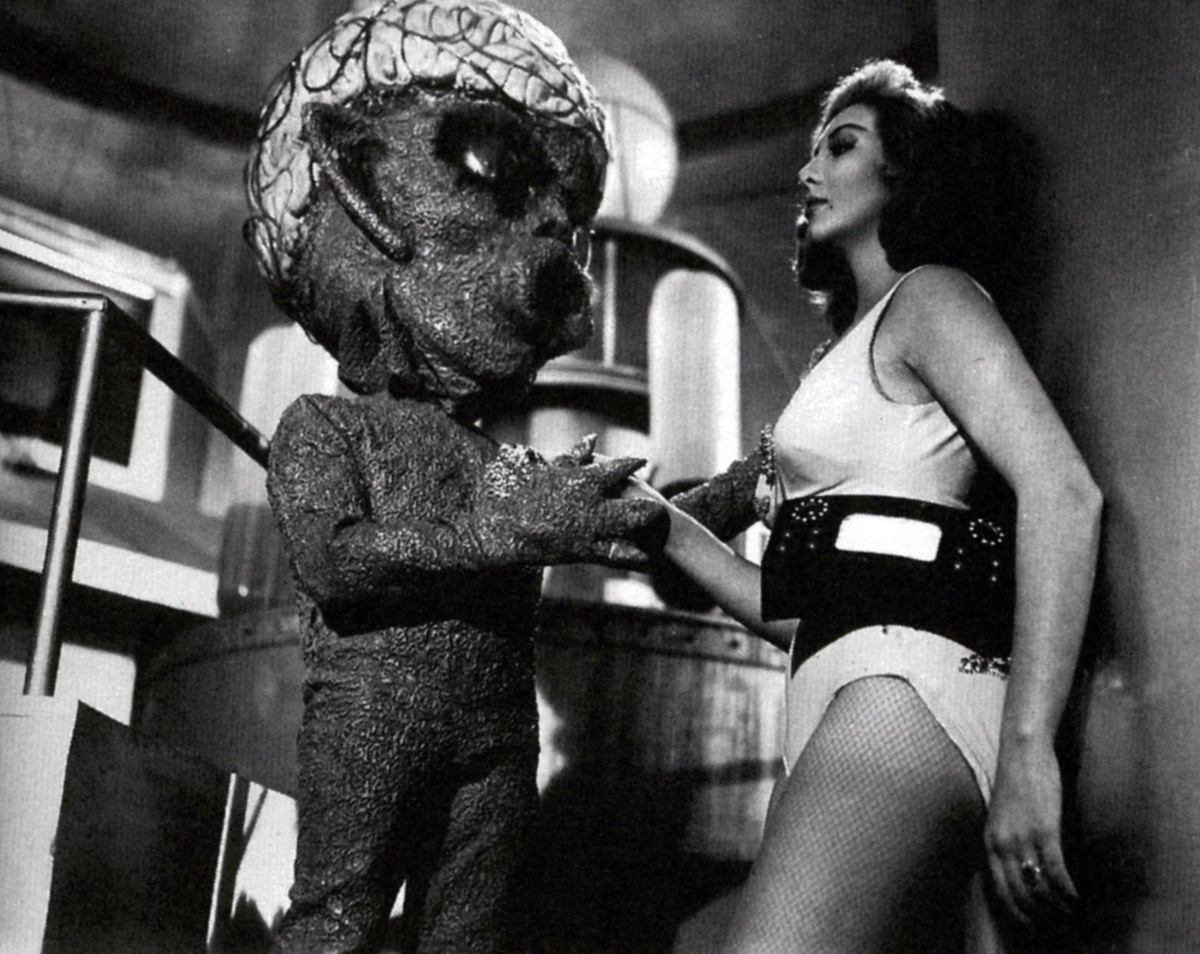 La Nave de los Monstruos (or ‘The Ship of Monsters‘) is a rare breed; a sci-fi comedy Western romance hybrid (with musical interludes!), displaying contemporary US genre tropes filtered through gonzo Mexican sensibilities to create something truly unique and memorable.
This film has it all – space travel, beautiful women, a robot, cowboys, vampirism, and of course the titular monsters – on a low budget which is more than made up for in sheer charm, bolstered with the kind of boundless creative imagination and enthusiasm necessitated by the combination of big ideas and a small amount of money with which to realise them.

Two women from outer space – the Venusian Gamma (Lepe) and Beta (Velázquez) – are tasked by their queen to capture the males of various planets, so the all-female Venus can be repopulated. Onboard their ship are the abducted monstrous males Tagual (a Martian prince); the cyclopean Uk; the creepy arachnid-esque Utirr, and Zok (who appears to be a human skeleton with the skull of a wolf or dog… not sure how he’s supposed to impregnate anybody, but hey, sci-fi!).
It’s interesting how the monsters of the film are actually innocent victims (at least initially) if you think about it; as Gamma cops to early on, telling Beta to forgive their aggressive nature as they have after all been kidnapped from their respective planets for – presumably forced – breeding.

Anyway, Gamma and Beta arrive in Chihuahua, Mexico, and immediately meet dopey cowboy Lauriano (González), who they decide is to be the Earth male, uh, ‘representative’ for their task. Lauriano and Gamma actually hit it off, which makes Beta jealous as she has taken a particular liking to the amiably dim cowpoke (who has a penchant for spinning extravagant lies about his ‘adventures’ down at the local bar, and occasionally springs into song; usually on the subject of how he longs for true love). This division between our two extraterrestrial ladies leads to the eventual vindictive release of the imprisoned monsters upon Chihuahua, although the film does actually take its time getting there, focusing more on light-hearted comedy mostly stemming from Lauriano’s stupidity, and his attempts to get Gamma to understand the concept of love.
González is clearly having a lot of fun as our foolish yet eminently likeable wide-eyed romantic. Lepe doesn’t get too much to do as, fundamentally, ‘the love interest’, but Velázquez leaves an impression as the scheming, jealous Beta (who as it turns out, ‘vamps’ in more ways than one).

The Ship of Monsters maintains a leisurely, knockabout tone far removed from the ominous, portentous tone of similar US sci-fi efforts involving monstrous threats to the human race; herein lies its real success. It’s simply a joy from beginning to end, never taking itself seriously and displaying an endearingly whacky ‘kitchen sink’ mentality with its aforementioned mashing together of genres. The monster designs are silly in the right, fun way, being obviously cheap in a manner which adds to the B-movie charm. The skeletal Zok is genuinely quite unsettling, with a really creepy voice and a nasty, cracked cackle he’s fond of deploying whenever he’s onscreen.

In fact, my only real complaints about this movie are that, once the monsters are unleashed, it’s actually quite brief and my boi Zok is barely utilised (I assume this is down to the budgetary/technical difficulty of showing him in motion; he really is just a skeleton with a canine skull). He left a real impression on me even though he only really gets to stand around laughing that horrible laugh, and appears to ignominiously fall into a hollow tree trunk during the final battle, never to be seen again. Maybe this means he survives…? I demand a Zok-centric sequel!

Anyone who enjoys monsters, weird genre mashups or fun should get on this one straight away.

← Call Me By Your Name
You Were Never Really Here →