The Thing and Big Trouble In Little China

Posted on August 13, 2017 by reelsteelcinema 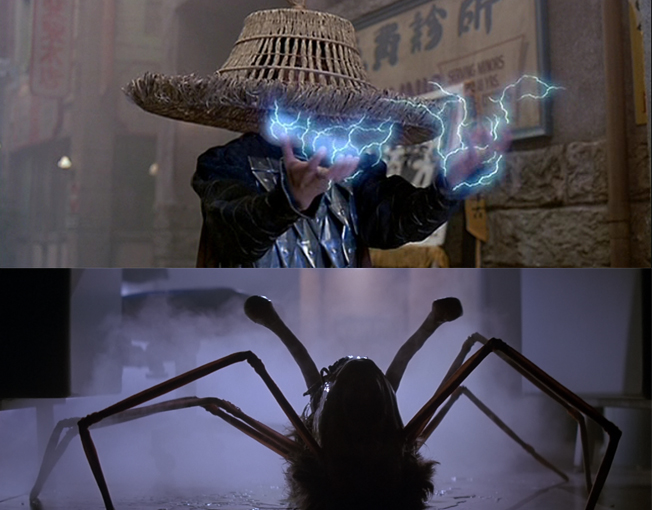 A veritable titan of horror, John Carpenter is perhaps the most revered of the filmmakers to emerge during that golden period of genre-defining horror films in the 1970s.
Carpenter’s films are amongst the most fondly-remembered of the era, due in large to his love of classical Hollywood storytelling. Indeed, while contemporaries like Tobe Hooper (The Texas Chainsaw Massacre) sought to assault the viewer with sickening imagery and deliberately confrontational filmmaking techniques, all Carpenter wanted to do was scare you. Where The Texas Chain Saw Massacre mounted an all-out assault on the senses, Carpenter’s Halloween was pure entertainment, its aim simply to shout “boo!” and make you jump.

The release of The Thing in 1982 marked something of a change in direction.
Still obviously influenced by classical Hollywood cinema, it nevertheless sees Carpenter moving away from the funhouse scares of Halloween towards a more refined, unnerving brand of terror. This shift in direction is most evident when comparing the monsters in both films. In Halloween the threat is tangible and unquestionable, a man in a white mask. The question of what the threat is in The Thing is a lot less clear. Sure, it’s an alien from outer space, but the fact that it can assimilate and perfectly imitate any of the characters means that you are always guessing who the titular Thing actually is. The real terror is not the Thing itself, but the constant unsettling niggling in the back of your mind that anyone could be the Thing, that none of these characters can be trusted. Even Kurt Russell’s cool, resourceful MacReady succumbs to the overwhelming paranoia, and by the end we are not sure whether even he is still human.

The Thing also impresses with its creepy, unnerving atmosphere.
Carpenter establishes this from the outset as he introduces us to a microcosm cut off from the rest of the world, surrounded by the bleak, blank Antarctic whiteness where any attempt at escape would almost certainly spell death. This is cemented in the sequence exploring the deserted Norwegian camp as Carpenter ratchets up the tension with the twisted bodies suggesting the true horrors to come. When those horrors do come, they do not disappoint. The practical creature effects work courtesy of effects legend Rob Bottin is simply outstanding, putting most modern CGI to shame. Round this off with an excellent ensemble cast and maestro Ennio Morricone’s eerie, pulsing electronic score, and you have what is arguably Carpenter’s masterwork.

This makes it all the more disappointing that the film bombed so badly at the box office and was attacked so viciously by critics.
The fact that it was released two weeks after Spielberg’s huge box office hit E.T. may be the reason it performed so poorly, its downbeat tone and monstrous alien completely at odds with audiences’ love of Spielberg’s friendly extraterrestrial. As if this wasn’t enough, it was also released the same day as Ridley Scott’s Blade Runner, another sci-fi classic.
Thankfully, in recent years The Thing has gone on to attain cult status, having undergone a complete critical re-assessment. Now widely seen as a sci-fi horror classic, it has spawned video and board games, action figures, and even a prequel film.

In stark contrast to The Thing’s grim, insular intensity is another of Carpenter’s box office failures, 1986’s blockbuster attempt, Big Trouble in Little China.
The director’s shot at the big time, Big Trouble is Carpenter’s one and only stab at an ‘80s genre-blender in the vein of mega hit comedy/horror/fantasy crossovers like Ghostbusters and Gremlins. For the most part the film succeeds in its intent to deliver pure popcorn entertainment. It is ironic then, that it was never the hit it deserved to be upon its initial release. It could be that the film can never decide exactly what it wants to be, having started out as a Western set in the 19th Century but then modernised when Carpenter, who had always wanted to make a kung fu movie, came onboard. Perhaps there was just too much going on, the film’s strange cocktail of comedy, action, horror, fantasy, romance, kung fu, Chinese mysticism and buddy movie proving too much to palate.

However, like The Thing, it has also gone on to acquire a cult following.
It wouldn’t be exaggerating to say that much of the fandom surrounding it can be attributed to the inimitable Kurt Russell’s standout performance as the exaggeratedly all-American Jack Burton. One of many Carpenter/Russell collaborations, a working relationship similar to that of Scorsese and De Niro, Big Trouble, it could be argued, sees them at their most comfortable together, Carpenter allowing his star to let loose and really flex his comedy chops. This makes for one of Russell’s greatest performances as he does his best John Wayne impression (having already perfected Clint Eastwood as the brooding Snake Plissken in Carpenter’s Escape from New York) while spouting hilarious one-liners (“It’s all in the reflexes!”). It also sees him playing against type, much of the film’s comedy coming from him being such an incompetent fool who bulldozers his way through life with complete ignorance. He has not got a clue what is going on, knocks himself out by shooting up at a ceiling, and walks into a fight with lipstick all over his face, yet he still manages to destroy evil through pure reflex.
No wonder he’s become one of Russell’s best-loved characters.

Big Trouble’s status as a beloved cult classic can also ironically be put down to what may have turned audiences off initially; namely its hotchpotch of seemingly mismatched genres. The film’s refusal to adhere to a single genre or style makes for a decidedly hyperactive viewing experience, leaving little time for boredom as it flits between scenes of martial arts, slapstick comedy, Hitchcockian suspense and fantasy monster madness.
Brimming with imagination, its tongue firmly planted in its cheek, Big Trouble is quite possibly Carpenter’s most unique, thoroughly enjoyable offering, a film truly deserved of its cult reappraisal.

To celebrate the 35th anniversary of The Thing, and the cult collaboration of John Carpenter and Kurt Russell, we will be holding a double-bill back-to-back screening of The Thing and Big Trouble In Little China at Sheffield’s Abbeydale Picture House, more details can be found here – bit.ly/2tMjjVo