A Month Of Alien: Alien Resurrection

Posted on November 11, 2015 by reelsteelcinema 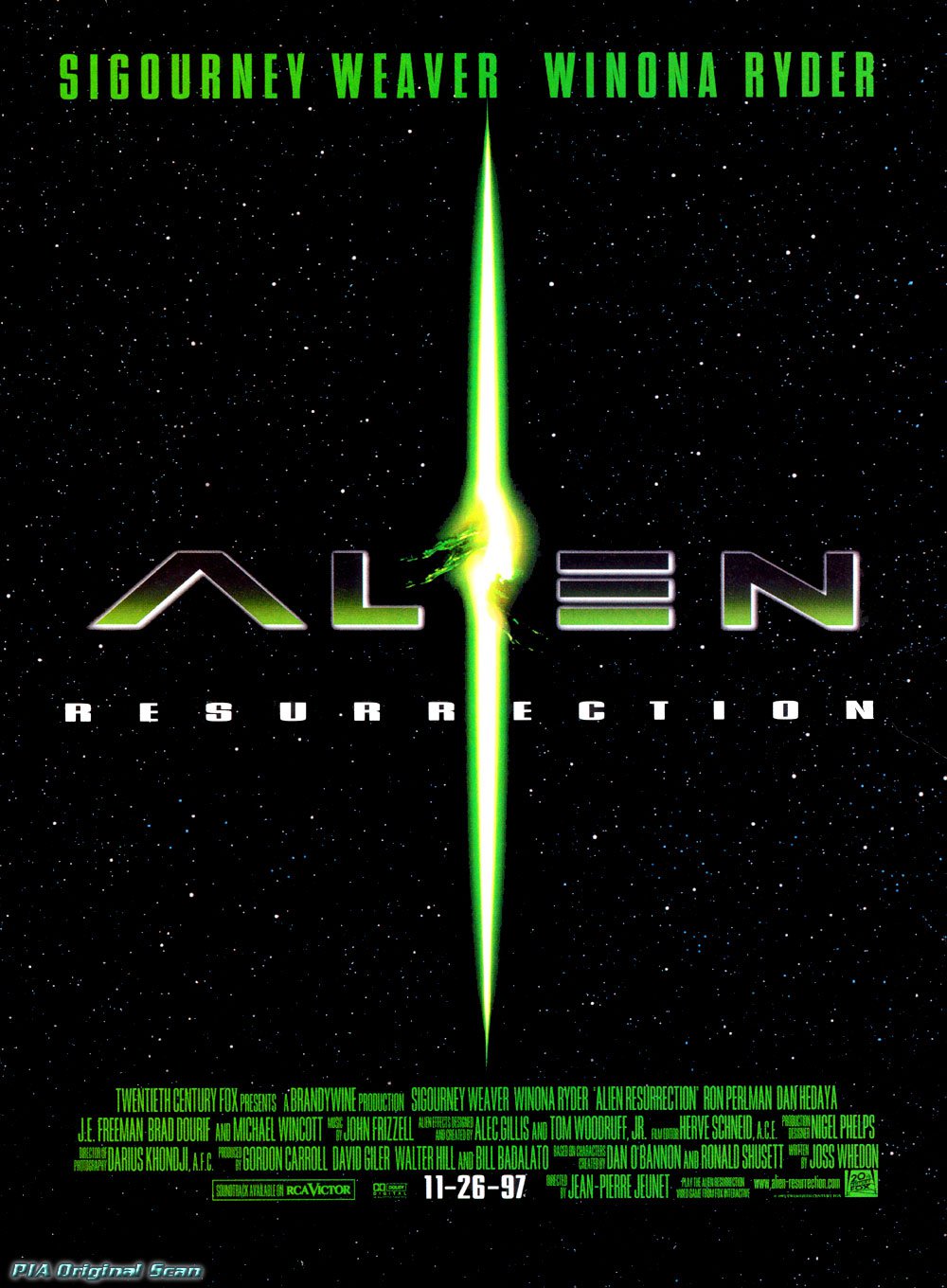 So what with Ridley Scott’s recent confusing/confused comments regarding the future of the Alien series (“Prometheus 2 isn’t going to lead into the Alien films, although it totally is and it’s actually called Alien: Paradise Lost, but it might still take another three movies anyway, and what’s an ‘Alien 5’?”), I thought it would be fun to run through the franchise – which becomes increasingly, fascinatingly messy and weird – reviewing each movie week by week.

By this I mean Alien, Aliens, Alien 3, Alien: Resurrection and OK, fine, I’ll do Prometheus as well (*sigh*, the things I put up with…). I’ll be reviewing each film in the version it was released, so no director’s cuts or assembly edits. Also I want to stick to the films which are ‘officially’ canon in the franchise – so no spin-off Aliens vs Predator bullshit either. Sorry to all three of you who enjoy those movies.

All right, without further ado…

After Alien 3, Fox Studios were faced with a bit of a predicament. The Alien series appeared to have come to a natural close, with Ripley sacrificing herself to destroy the Xenomorph threat, getting the heroic death she deserved and saving countless lives from the Alien Queen inside of her (and moreover, from the sinister machinations of the Weyland-Yutani corporation). But as ever, studio greed ruled that the financial success of the franchise meant that it had to continue, logic be damned. And so, despite the finality of Alien 3 – not to mention its generally perceived feebleness (stressing “generally perceived” – I’m actually quite fond) – Alien: Resurrection staggered into existence.

The fundamental problem with Resurrection is that it can’t even justify its own existence, beyond the obvious aim of making money. The series had already come to a neat end, and by this point there was nothing particularly interesting or vital to add. There is an entertaining and admittedly well-argued theory that Resurrection is actually all about how redundant it is, mocking itself in a way so beautifully, subtly satirical that I wish I bought into it (http://thespoilist.com/the-apologist-in-defence-of-alien-resurrection/). Alas, I feel like the theory is simply trying to do a favour for a bad movie.

The film takes place two hundred years after the events of Alien 3. Scientists have managed to clone Ripley and extract the Alien Queen embryo from her, because of course that’s a great idea. The clone, ‘Ripley 8’, is kept alive for reasons the plot doesn’t really bother to explain, and she exhibits some unusual qualities (super-strength; acidic blood; looking exactly like Sigourney Weaver but with none of her charisma). Yes, she’s part-Xenomorph – in fact, it isn’t clear how much of the original Ellen Ripley remains at all. The extracted Queen quickly matures and starts to breed; a motley crew of bounty hunter types* shows up with some people they’ve kidnapped – no questions asked – who as it turns out are for use as Alien hosts; and the Queen’s subsequent ‘children’ are tested on by nefarious scientists (chiefly, J.E. Freeman and Brad Dourif) who want to tame them for use as biological weapons. Anyway, shit predictably hits the fan and ‘Ripley 8’ sort-of teams up with the crew, as they attempt to destroy the ship and the Aliens onboard before it reaches its destination… Earth.

Now, as ridiculous and inconsequential as all of this sounds, there’s actually a silly, fun adventure romp hiding somewhere in that premise. The problem is chiefly one of tone. For a film to work on the most basic level, it needs a consistent ‘feel’. This is something Resurrection lacks, flitting between wannabe Aliens-style action and weirdly misjudged, humourous camp, with one scene (wherein ‘Ripley 8’ discovers the previous seven ‘failed’ clones) briefly veering into queasy body horror, and admittedly showing off some impressively nasty designs with its mangled, monstrous Ripleys. Director Jeunet’s distinctly French sense of humour and stylistic sensibilities may work well elsewhere, but they feel totally wrong for an Alien film, throwing out most of the horror at the series’ foundations but not replacing it with action that’s remotely compelling, or even believable characters we might care about. The film just feels messy, lazy and unsure of itself throughout, and any of the wild, over-the-top promise of the basic plot – with its clones, bounty hunters and pet Xenomorphs – is squandered in a turgid quagmire of identity confusion.

The performances are almost uniformly poor, with the aforementioned Freeman and Dourif both in sneering pantomime villain mode, along with Dan Hedeya as a hysterical, cartoonish general; and on the other hand, Winona Ryder woefully miscast and trying to play things straight. Even Weaver feels like she’s coasting here, perhaps dimly aware of how badly the film was betraying the legacy of its predecessors but too contractually obligated to pull out (she did co-produce the movie, but given how staunchly she had previously fought for artistic integrity in the franchise, I find it hard to believe she was fully onboard with the direction Resurrection went in).

The film gives ‘Ripley 8’ a kind of ambiguous morality, positing her as a wildcard who could turn on the humans as quickly as she kills her Alien ‘family’, but she’s so devoid of any real personality (functioning as a plot device rather than a character) that she just feels like an empty, tedious mockery of the ‘real’ Ripley. One very minor saving grace is that the bounty hunter crew is led by Michael Wincott, who is gifted with a truly fantastic voice. It’s like whiskey-drenched sandpaper, and I mean that in the best possible way.

The editing is at points so unnecessarily flashy that it’s distracting, and the actual picture looks desaturated and ugly (and I should mention I’m basing this review on the supposed crisp picture-quality of the Blu-Ray version). The previous films used a kind of stripped-back aesthetic to present a compellingly dark, low-tech future; here, everything feels over-designed and obviously manufactured, to the point where it looks strangely cheap. I confess to enjoying how gloopy and icky the Aliens are here, covered in a thick layer of ooze and helped by some good prosthetic-work. That said, I share the same problem many fans of the franchise do when it comes to this movie; the Alien Newborn, a kind of warped mix of human and Alien DNA spawned by the Queen (yet identifying with Ripley as its ‘mother’), is a deeply stupid and regrettable new strain of the species.

*Joss Whedon wrote the script (though he has firmly distanced himself from the finished film), and these characters feel like rough prototypes of the loveable crew of his TV series Firefly, which would burn brightly but briefly from 2002-2003 (by the way, if you’re reading this and you haven’t seen Firefly… well, why are you bothering with this drivel? Go watch Firefly).